2,459 people have already ordered the newly updated Vince’s book in the past 13-hours.
Were you one of them?
Here’s a some great articles about Vince and his training.
Vince Gironda’s Insider Tips for Better Gains
The Essence of Bodybuilding10 RENEGADE Beliefs of Vince Gironda

Top 7 Gironda Exercises Of All Time

Vince Gironda Legend and Myth by Alan Palmieri is the most complete and comprehensive writing on Vince Gironda…Ever!

This is a must read for anyone interested in Vince Gironda.The “Iron Guru” was perhaps at his pinnacle of fame in the “Golden Years” of bodybuilding, the 1960’s. During that time, Vince dominated the scene and Vince’s Gym, was known as the Mecca of bodybuilding. Not only champion bodybuilders trained at Vince’s Gym,movie stars were also regular visitors to seek Vince’s advice and training. People like Eric Estrada, Clint Eastwood,Clint Walker and many others. Hollywood studios usedVince and his gym to shape up their stars.

Also included are topics such as…

This book is absolutely incredible. It cuts right through all the hype and gets back to the basic old school muscle building information that has been proven over and over for decades.You don’t need the latest ab gadget or newest secret supplement.

Just follow the advice of someone who will help you work hard and sweat putting you on the right track to getting the lean healthy
body you deserve.

Let Vince Gironda show you the path to a happier healthier life in this newly updated master manual.

Get This Massive Book Now <<< 50% Off & Cool Bonus
Sign off,
David Grisaffi
‘Firm and Flatten Your Abs’
P.S. If you think the natural way is the only way, you’ll love the opportunity below……. 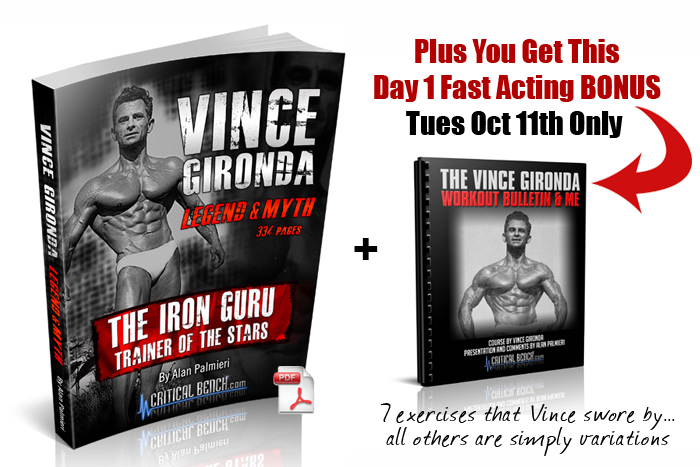